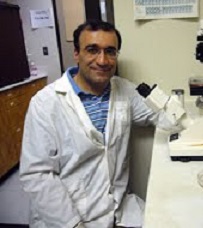 In collaboration with the Sanford Cancer Biology Research Center and several other laboratories nationwide, we investigate the role of a novel ubiquitin-like protein, UBXN2A (Rezvani et al., 2009) , in colon and breast cancers. We use a multi-pronged approach, including techniques from biochemistry, molecular biology, genomics, and proteomics. Our studies suggest that elevated UBXN2A in early colon and breast cancer progression is an indicator of cellular compensatory responses that enhance pro-apoptotic activities, most likely via a tumor suppressor gene called p53. In addition, tissue microarray data (Alves et al., 2008) and our own results indicate that UBXN2A is enhanced in well-differentiated human colon tumors. Furthermore, our data demonstrate that a similar upregulation is followed by a nucleocytoplasmic translocation of UBXN2A upon genotoxic stress, which can ultimately lead to a p53-induced apoptotic response. Our ongoing studies will provide insights into the role of UBXN2A as a possible anti-cancer chaperone and it raises new directions for more efficient cancer therapy. If UBXN2A can be used as a molecular target for reestablishing proper p53 function in colon or breast cancer patients, its manipulation alongside current chemo- and radiation therapies may lead to improved cancer treatment efficacies.